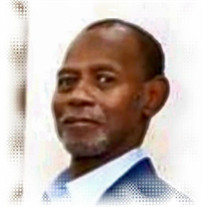 Tony E. Stepney Sr. was born on April 17, 1960 in Joliet, Illinois. He left this world after a long battle with cancer in the comfort of his home. Tony attended the Joliet Public School District. Later he attended Joliet East High School.... View Obituary & Service Information

The family of Tony Stepney Sr. created this Life Tributes page to make it easy to share your memories.

Send flowers to the Stepney family.