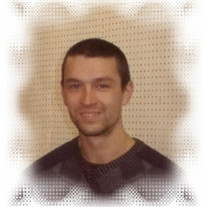 Skip Denim-Blue Trautman Age 27 passed suddenly Monday September 08, 2014. He was born February 12, 1987 in streator Illinois. He was a lifelong resident of Joliet, IL. and had recently moved to Danville, il. Preceeded in death by his father Theodore “Skip” Trautman, Grandparents; Joyce and James “Jim” Turner, Jesse Roman and one niece; Samantha Jo Anderson. He is survived by his mother Gloria J Drake of Norris City, IL., four sisters; Victoria Ridenour of Pontiac, Gena (Steven) Roman-Acree of Danville, Laura Trautman (Cody Carpenter) of Danville, and Cecelia (Kameron) Pearce of McLeansboro, Il. Also numerous Aunts, Uncles, cousins, nieces, nephews, and friends. Skip was a United States Army Veteran serving in the Indiana National Guard, Private First Class, served in Iraq 2008-2009. He was a wonderful blessing to his family and friends. He was as proud of them, and as they were of him. He was a loving and kind man, with a heart of gold and a love of his family that could never be matched. His smile and hugs would brighten anyone’s day. He was loved by anyone that knew him, and his big heart. Skip will be dearly missed. VISITATION And DVD MEMORIAL: Friday September 12, 2014, 12:00 – 8:00 PM at Delgado Funeral Chapel, 400 Landau Ave. (at Jackson St., Rt.6). Live Webcasting of visitation also available on-line for details call (815) 774-9220. Funeral services held at Delgado Funeral Chapel Saturday September 14, 2014 at 11:30 AM Burial & Military Honors: Mount Olivet Cemetery, 1320 East Cass Street. Online guest book & Floral Arrangements at: www.DelgadoFunerals.com Use Logo on file at bottom of Obituary Thank You,Greg Bolan

Skip Denim-Blue Trautman Age 27 passed suddenly Monday September 08, 2014. He was born February 12, 1987 in streator Illinois. He was a lifelong resident of Joliet, IL. and had recently moved to Danville, il. Preceeded in death by his father... View Obituary & Service Information

The family of Skip Denim Blue Trautman created this Life Tributes page to make it easy to share your memories.

Send flowers to the Trautman family.