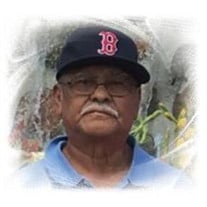 Samuel Navarro was born on February 20, 1943 in San Nicolas Tolentino, Izucar de Matamoros, Puebla, Mexico. He was a strong and honest family man that always put his family first. Samuel was kind hearted, but always spoke his mind. He enjoyed cooking and when you came to his house, there was always a plate a food that was offered to you. Samuel was a caring and loving father, grandfather, and great-grandfather that will be truly missed and forever in the hearts of his family. Preceded in death by his parents, Ruben Navarro and Francisca Cariño Martinez. Survived by his four children, Samuel (Miroslava) Navarro, Anabel (Paulino) Navarro, Macrina (Benito) Sanchez, and Lorena (Andres) Solano; ten grandchildren, Samir, Dafne, Heydi, Kaylee, Josias, Cristian, Anthony, Steffany, Erica, and Roman; and six great grandchildren, Edwin, Axel, Angelica, Meleny, Miguel, and Logan.

The family of Samuel Navarro created this Life Tributes page to make it easy to share your memories.

Send flowers to the Navarro family.