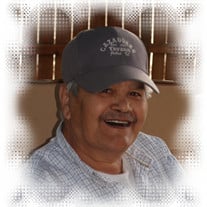 Rogelio C. Rojas Sr. Age 77 passed away Saturday December 13, 2014 with family by his side. Born August 10, 1937 in Bellas Fuentas, Michoacan Mexico and was a lifelong resident of Joliet. Rogelio is preceded in death by his daughter; Olivia... View Obituary & Service Information

The family of Rogelio C. Rojas Sr. created this Life Tributes page to make it easy to share your memories.

Send flowers to the Rojas family.