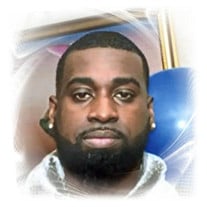 Quentin Denard Woods, affectionately called “Black Boy”, age 38, gained his wings and went to be with the Lord on Friday December 20, 2019. Quentin was born to Michael Woods and Deborah Taylor in Joliet, Illinois on July 25, 1981. Quentin accepted Christ at an early age at Church of Complete Christ, under the pastorage of Susan Dailey. He attended Joliet Public Schools and graduated from Joliet West High School. Quentin was a hard worker and worked several warehouses around Joliet. At the time of his death, he was employed at Black Horse Carriers.Quentin was a caring, kindhearted person, who always was there for his friends, and many friends he did have. He LOVED his family dearly and was a dedicated father to his two sons and had given them his unconditional love. To know him was to love him. If you saw a funny joke or a message on Facebook, you could bet they were from Quentin. Quentin left this earth tragically on December 20, 2019. We know there is an appointed time for everything…. A time for birth, a time to die, a time to laugh and a time to cry. We are crying today, but we will laugh when we see him again. Quentin leaves to cherish his memories to his parents, Michael Woods and Deborah Taylor; his children, Davion and Quentin Jr.; maternal grandparents, Charley Williams Sr. and Junella Williams; paternal grandparents, Floyd (Margie) Woods and Emily Woods; his brothers, Michael Woods and Robert Davis Jr.; his sisters, Tiffany Willams, Sherrika Williams, and Mikhi Woods; and a host of aunts, uncles, nephews, nieces, cousins, and too many friends to mention. Quentin also leaves behind a special dad, Ronnie Unger; a special mom, Sharon Perry; and three special brothers, Jeauvon Perry, Davion Perry, and Shawn Rodges.

Quentin Denard Woods, affectionately called &#8220;Black Boy&#8221;, age 38, gained his wings and went to be with the Lord on Friday December 20, 2019. Quentin was born to Michael Woods and Deborah Taylor in Joliet, Illinois on July 25,... View Obituary & Service Information

The family of Quentin D. Woods created this Life Tributes page to make it easy to share your memories.

Send flowers to the Woods family.