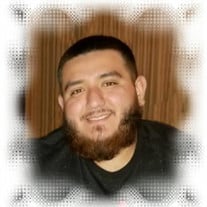 Mario Estevan Silva Gonzalez On Tuesday, December 21, 2021 loving father, passed away at the age of 28. Husband of Amanda (Diaz) Silva Gonzalez, Father of Sienna Silva Gonzalez, Vivianna Silva Gonzalez, Mario Silva Gonzalez Jr., and Camila Silva Gonzalez. Step Father of Laylah Bedolla and Marcos Bedolla Jr. Son of Fiacro Silva Jr. and Lidia (Tony) Seay. Brother of Tony Seay Jr. and Armani Seay. Grandson of Catalina (Fiacrot) Silva, Nathania Gonzalez, and Step Grandson of Linda R. Seay. He was also a beloved nephew, cousin. Mario was known for being a gentle giant; Always seen smiling, laughing, & joking around. He was the life of the party. Mario loved his grandmothers' Mexican Homemade cooking. He was a lifelong fan of the Chicago Cubs & the Chicago Bulls. From a very young age, Mario loved playing baseball, which he passed on to his kids. His children will remember him as their goofy, dancing, video-gaming, playful Papi that taught them to be brave, strong, and fearless. His wife and children will miss him dearly. Mario was born August 10, 1993 in Palos Heights, IL to Paco Silva and Lidia Seay (née Gonzalez). He was raised in Joliet, IL by his parents, mother, father and step-father, Tony Seay, Sr; family and family events were at the heart of everything he did. As a child, he loved his action figures, his querido monos. In his teen years, Mario was often found playing video games like Mortal Kombat, Call of Duty, and War Zone, yet in full contrast to those games, he was full of a loving spirit, who met everybody with a bright, warm and glowing smile. Mario graduated from Joliet West High School in 2011. With a large family in and around the Joliet, IL area, Mario spent time from one family activity to the next, always enjoying and reciprocating the Love showered upon him. This grounding in family explains why he loved good food and spent many hours cooking meals for family, including teaching his kids how to prep their meat just right before cooking. One of his passions was playing baseball and the Chicago Cubs was his favorite team. It was a perfect combination when he proposed to his wife, Amanda, on the day of the Chicago Cubs Rally when they won the World Series and they grew into a loving family of six: four girls and two boys. Although still young, Mario had developed into a respectful, model young man. Mario's ever attentive, extended family all participated in his upbringing, orgulloso of who he had become. He worked hard to set strong examples for his dear, younger siblings - he kept his word to them, mentored and enjoyed being the Big Brother. Mario was a dedicated Father, spending important time (ball games, church, birthday parties, movies, cookouts) in all of his children's lives. He is survived by his wife Amanda, his six children, Laylah, Marcos, Sienna, Vivianna, Mario, Jr., and Camila, his parents: Fiacro Silva, Lidia Seay, Tony Seay Sr., his brother, Tony, Jr, and sister, Armani, paternal grandmothers, Catalina Silva And Linda Seay, his maternal grandmother, Nathania Gonzalez, and multiple aunts, uncles, and cousins. Mario was preceded in death by his uncle, Samuel Gonzalez, grandfather, Tommy Seay, Jr, great grandmother, Maria Guadelupe Torres Rocha, paternal grandfather, Fiacro Silva, Sr, maternal grandfather, Juan Edward Gonzalez. Please join the family (in person or in spirit) to celebrate Mario's life on Monday, January 3, 2022 at the Delgado Funeral Chapel, 400 Landau Ave, Joliet, IL at 5 - 9 p.m. and Tuesday, January 4. 2022 at Saint John The Baptist Church, 404 N. Hickory, Joliet, IL at 10 a.m. *In lieu of flowers, the family kindly ask that memorial donations be sent to assist Mario's family during this very difficult and sudden loss.*

The family of Mario Estevan Silva Gonzalez created this Life Tributes page to make it easy to share your memories.