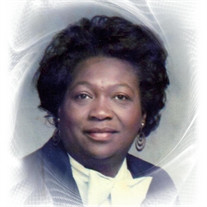 Lula King was born on a beautiful winter day, February 7, 1933 to Albert Sr. and Ollie Lee in Clinton, Kentucky. She went home to be with her Lord and Savior on Wednesday, August 4, 2021 at AMITA Saint Joseph Medical Center in Joliet, Illinois.... View Obituary & Service Information

The family of Lula King created this Life Tributes page to make it easy to share your memories.

Send flowers to the King family.