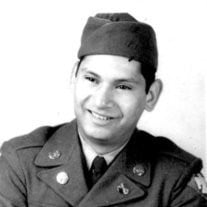 Limon, Locardio &#8220;Mac&#8221; Age 80 passed away Tuesday July 30, 2013 with his loving family by his side, he went with God and the Angels peacefully. Born December 9, 1932 in Joliet and a lifelong resident. Preceeded in death by his parents;... View Obituary & Service Information

The family of Locardio "Mac" Limon created this Life Tributes page to make it easy to share your memories.

Send flowers to the Limon family.