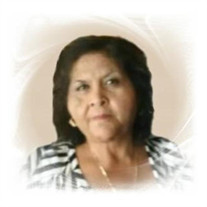 Imelda Hernandez “Grandma Imelda or Abuela” was a devoted wife, mother, grandmother, great grandmother, sister and friend. She peacefully passed away on December 17, 2020 at age 69; after years of medical health issues. She was born on May 21, 1951 in Monterrey, Mx to Lazaro Obispo Tobias and Maria De Jesus Tobias. She later moved to the United States to San Juan Texas where she; began a life of self-sacrifice for her family members. Her father’s willingness to leave their homeland in exchange for living the American Dream created the opportunity to grow for her. She ultimately paved the way for future generations with her move to this country. As, in 1972, she married her husband, Nicolas Z. Hernandez who resided in this same area were they met, but was from Dermaderro, cuida de JT, Mx and conceived four children.  Imelda believed in the use of community engagement and helping others, as a form of strength for herself and other misrepresented populations. In her time, here she she was confronted with racial disparities, economic hardships and chronic medical conditions. She put her faith in God, family and others to keep her going through those times. Imelda always put others first and her willingness to sacrifice her time in exchange for her community, as well as using it teach others to strive for more through community awareness and set an example for future family members. She truly was the family’s advocate. Through years of community engagement she was, able to aid others by legal advocating, empowerment skills and teaching them to function; as they migrated to the United States. She was an example of a social service provider, without the title that and replaced with life experience. She fulfilled her lifelong goal of becoming a naturalized U.S. citizen and raised self-sufficient children who would continue her path of strength. During, her time you would find her baking, socializing, helping others, doing for her family, spending time with her husband and entertaining friends. She always kept herself busy whether at home or with others. She demonstrated empathy, self-sacrifice and compassion others. She truly was the example of resiliency and strength to those in her family and others. Preceded in death by her; father, Obispo Tobias and mother, Maria Tobias. As well as; her sister Hortencia Tobias and son Ruben Hernandez.  Survived by her husband Nicolas Z. Hernandez. Her children; Fernando Hernandez, Patricia Hernandez and Veronica Munoz. Her granddaughters, Olivia Rojas, Cecilia Rojas and great granddaughter Laylanii M. Lombardi. Along, with her grandsons Jeremiah E. Mahan, Richard N. Lombardi, Giovonnie R., Luis Angel and Joel Hernandez; along with great grandson Ruben N. Hernandez.  VISITATION: Is to be held Monday December 28, 2020 from 5:00 p.m. to 8:00 p.m. at Delgado Funeral Chapel at 400 Landau Ave. (at Jackson St.), Joliet, IL 60432. Live Visitation Webcasting; also available on-line for details call (815) 774-9220.  FUNERAL SERVICES: To be held; Tuesday December 29, 2020 from 10:00 a.m. to 11:00 a.m. at St. Joseph’s Church on 416 N. Chicago St. Joliet, IL 60432. Followed by a graveside ceremony at Woodland Memorial Park, 23060 W. Jefferson St. Joliet, IL 60431.

Imelda Hernandez &#8220;Grandma Imelda or Abuela&#8221; was a devoted wife, mother, grandmother, great grandmother, sister and friend. She peacefully passed away on December 17, 2020 at age 69; after years of medical health issues. She was born... View Obituary & Service Information

The family of Imelda Hernandez created this Life Tributes page to make it easy to share your memories.

Imelda Hernandez “Grandma Imelda or Abuela” was a devoted wife,...

Send flowers to the Hernandez family.