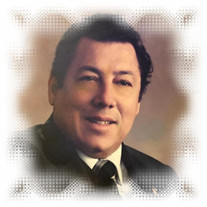 Gregorio “Goyo” G. Rodriguez, age 86, passed away on Tuesday May 25, 2021 at home with his loving family at his side. Born in San Benito, Texas, and was a lifelong resident of Joliet. Gregorio lived in the Joliet area for over 75 yrs. He worked as a laborer for over 20 yrs at US Steel Mill in Joliet, IL retiring in 1980. Also he was a carpenter, building houses and remodeling for many years. Gregorio was the business owner of Texas Bar from 1968 to 1975 after the owner of Spanish American Club with his brother Jose "Pepe" for several years both in Joliet. He enjoyed life to the fullest, playing his accordion, listening to music, friend & one of his favorites "Freddie Fender" and watching old movies. He is preceded in death by his parents, Carlos and (Julia nee Guerrero) Rodriguez. Gregorio is survived by his children, Sylvia (Martin) Aguilera, Malva (Miguel) Zavala, George Jr., Edward (Janie), Jacqueline "Jackie" Borunda, Velma "Bonnie", April (Samuel) Nunez and Georgeana "Gigi"; thirty two grandchildren, fifty great grandchildren; two step sons, Antonio Galvez and Luis Becerrill; three sisters, Mary Carrizales, Stella (late Daniel) Rios, Elena (Mike) Zuniga; three brothers Carlos, Joe "Pepe" (Tencha) and Valentine (Cynthia) Rodriguez. Also numerous nieces, nephews, cousins and friends. Three years ago was the turning point of no return, our dad could no longer care for himself and was in need of special care . Without the help and care of the entire staff at Kindred Hospice we could not have gotten through these most difficult times. Our family was very fortunate to have such loving, comforting and understanding caregivers. Our father was quite a Character, stubborn and very demanding. Many times he would fire us all. The next hour he would ask what's for dinner and act like nothing ever happened. We are thankful for the huge role Kindred Hospice played in our lives. They were there for us 24/7 no matter what the need was. We had many sad times and good times. Thank you, thank you. We are sincerely grateful and have much gratitude from the bottom of our hearts for the loving care of our father Goyo! Gregorio will be missed dearly by his beloved family and friends. VISITATION & DVD MEMORIAL: Thursday June 3, 2021, from 5:00 PM to 9:00 PM at Delgado Funeral Chapel, 400 Landau Ave., at Jackson St., Joliet. Live Visitation Webcasting also available on-line for details call (815) 774-9220. FUNERAL SERVICES: will be held Friday June 4, 2021 at 9:30 AM from Delgado Funeral Chapel to Our Lady of Mt. Carmel Catholic Church, 205 E. Jackson St, Joliet, where a Funeral Mass of Christian Burial will be celebrated at 11:00 AM Burial: Woodlawn Memorial Park I

Gregorio &#8220;Goyo&#8221; G. Rodriguez, age 86, passed away on Tuesday May 25, 2021 at home with his loving family at his side. Born in San Benito, Texas, and was a lifelong resident of Joliet. Gregorio lived in the Joliet area for over 75... View Obituary & Service Information

The family of Gregorio G. Rodriguez created this Life Tributes page to make it easy to share your memories.

Send flowers to the Rodriguez family.