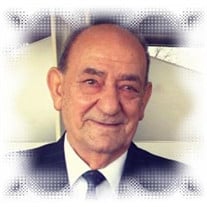 Giuseppe “Nonno” Accomando Gagliano, Age 87 of Shorewood, IL, passed away on May 31th, 2017, at home surrounded by his closest family. He was born to the love of Paolo Accomando and Providenza Gagliano in Bagheria, Sicily, on December 24, 1929. On June 29, 1958, he married Maria Luigia Simone, and together they began their wonderful story with family and friends in different cities including Maracaibo, Valencia, Caracas, Maturin, Miami and Chicago – always touching hearts and cultivating beautiful memories and good times. From this great love they bore three children, Paolo, Cesare and Provvidenza Accomando. Later, came his 7 grandchildren, Ronald, Jean Paul, Roxanna, Fabiola, Jean Franco, Paolo, and Alexandra; as well as, one he emotionally adopted as his own Alvaro. Also he was survived by 4 great grandchildren Gianluca, AJ, Analia & Aaron to form the wonderful family, they have always been. Giuseppe was, and always will be considered a man of big heart. He was always playful, cheerful, generous, helpful and most of all, an ENDLESS FIGHTER –one that will never give up. He was a man capable of making anyone lucky enough to have known him for even one second. Nonno will always make you feel like a part of his family and his closest core, welcoming you with a big hug and a smile. The love for his family was without doubt one of the things that kept him going, and motivated him most. You could always count on Nonno for words of encouragement, advice, or a simple life experience that will relate and/or make you resonate on your current situation. He was a natural motivator no matter what his or your personal situation was. Nonno was a businessman at a very early stage of his life due to WWII, and the necessity to bring food to his younger siblings. Nine years after the war madness ended, he decided to move to America, landing on Venezuela. Throughout his journey there, he ventured into Construction, where he built his career, tirelessly fighting for a better future for his family and friends. He loved hunting; and his greatest moments of happiness were at a hunting event in Calabozo, or at family gatherings with family and friends, an Italian food feast of many courses, and a good game of dominoes. He never forgot his Sicilian roots, and was fascinated by Sicilian music. We will remember you and love you forever, because it is simply impossible to forget you Nonno! Rest in peace! and just how you said it a couple of months back... “Ve preparandonos el camino para cuando tengamos que reunirnos”

Giuseppe &#8220;Nonno&#8221; Accomando Gagliano, Age 87 of Shorewood, IL, passed away on May 31th, 2017, at home surrounded by his closest family. He was born to the love of Paolo Accomando and Providenza Gagliano in Bagheria, Sicily, on December... View Obituary & Service Information

The family of Giuseppe Accomando Gagliano created this Life Tributes page to make it easy to share your memories.