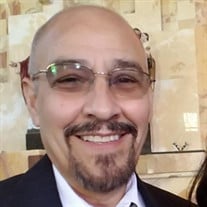 Age 68, was placed into the awaiting arms of the Lord on Friday March 27, 2020. He passed peacefully in his home, just like he had wanted, surrounded by his loving family. Born on June 10, 1951 in La Garita, Jalisco Mexico, he moved his family to Aurora, Illinois and later moved to Plainfield, Illinois where he resided til the end. Gerardo fought a long and hard battle against cancer for the past 2 years, with such courage and determination, never giving up. Going head to head with cancer, with the constant support of his family; specifically his wife, he continued to show unwavering fight. A great provider for his family, Gerardo was constantly working, constantly learning and taking classes. Apart from being machine maintenance for Phoenix Closures for about 35 years, he worked side jobs, taking pride in being a hard worker. He loved his family and his work. He enjoyed watching soccer; being a huge chivas fan, and going to home improvement stores and buying new tools. He could fix anything and if on the off-chance he couldn’t, then it couldn’t be fixed. He loved learning and stressing the importance of an education; he believed that whatever you learned no one could ever take it away from you. My grandpa’s departure wasn’t sudden, though that didn´t deter me from hoping against hope that he would make a full recovery and I would get many more years with him. Whenever something drastic happened in my family we would always rise above it and make it out okay, so that's why when i heard a voice in my head that told me he would make a full recovery and I listened to it. Right before he passed he let out his final tears. His tears might´ve been to express his sadness of leaving his family behind, not knowing what would happen to them now that he is no longer with us physically, but I´d like to think his tears were because he was finally able to see the face of God and feel serene or maybe they were tears of joy, at finally being able to see our departed family. Fue muy valiente mi abuelito, and for that I thank him immensely for holding on for so long for his family. Preceded in death by his grandparents, Lazaro Betancourt Flores and Mercedes Farias Perez and Francisco Contreras and Guadalupe Sanchez Manzo, his father Ventura Contreras, his brother Luis Contreras, and his grand-daughter Desiree Contreras. Survived by his mother Graciela Contreras Betancourt “mama chela”, his wife of 8 years Magdalena de Contreras (nee Martinez). Devoted father of Diana Rivera (Alfonso), Cathy Contreras, Gerardo Contreras Jr., Sandra Contreras (Reynaldo), Ines Contreras, Ismael Contreras, and Santiago Contreras. His grandchildren: Mercedes Contreras, Jasmine Contreras, Alexis Aguilera, Lizette Aguilera, Leslie Morales, Johnathan Morales, Nayelie Valenciano, Cristian Rivera, Isaias Rivera, Destiny Contreras, Matteo Rivera, and Rey Valenciano. With a great grandchild on the way. His siblings Esther, Andres, Bertha Lilia, Marisela, Nelva, Graciela, Angelica, Maria del Carmen, Estela, Ventura, and Mireya. With numerous nieces, nephews, family members and friends. We would like to thank Joliet Area Community Hospice and his nurses for the continuous care. VISITATION: Tuesday March 31, 2020, 4:00-8:00 PM at Delgado Funeral Chapel, 400 Landau Ave. in Joliet, IL.

Age 68, was placed into the awaiting arms of the Lord on Friday March 27, 2020. He passed peacefully in his home, just like he had wanted, surrounded by his loving family. Born on June 10, 1951 in La Garita, Jalisco Mexico, he moved his family... View Obituary & Service Information

The family of Gerardo Contreras Betancourt created this Life Tributes page to make it easy to share your memories.

Age 68, was placed into the awaiting arms of the Lord on Friday...