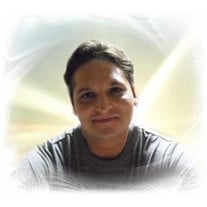 Francisco Javier Villanueva, age 40, passed away unexpectedly on Wednesday February 27, 2019. Born on May 13, 1978 in Monterrey, Nuevo León, Mexico. He was raised in Chicago, and later resided in Joliet with family. Javier was a graduate of the class of 1996 at Plainfield High School. Although he had battled with bipolar disorder for twenty plus years, he was known to be the funny, jokester of the family, who always wanted to make others laugh. Javier was big hearted person that wanted to share and help others when he could. To his niece and nephews, he was their hero. Javier loved to listen to music; mostly Norteñas, Cumbias Columbianas, and Rancheras. He enjoyed long walks outside, finding peace in what nature offered and often spent time reading and writing poetry. Javier liked to lift weights and exercise on most days. A favorite childhood memory of his was playing on a little league baseball team for the Chicago Park District called the Yankees. He went on to be a big fan of the Chicago Bears, Chicago Cubs, and the Mexican soccer team, Tigres. Javier will always be remembered for his courage through the difficult times, and will truly be missed by his beloved family and friends. Preceded in death by his father, Francisco Javier Villanueva; infant brother, Hector Adrian Villanueva Gonzalez; maternal grandmother; and both grandfathers. Survived by his mother Norma Martha Villanueva (nee Gonzalez); two sisters, Erika A. (Martin) Ruiz and Judy (Roldan) Villanueva; four nephews, Adrian, Juan, Julian, and Aadan; and one niece, Leilany. Also survived by numerous family and friends. In lieu of flowers, memorials to the family would be greatly appreciated.

Francisco Javier Villanueva, age 40, passed away unexpectedly on Wednesday February 27, 2019. Born on May 13, 1978 in Monterrey, Nuevo León, Mexico. He was raised in Chicago, and later resided in Joliet with family. Javier was a graduate of... View Obituary & Service Information

The family of F. Javier Villanueva created this Life Tributes page to make it easy to share your memories.

Send flowers to the Villanueva family.