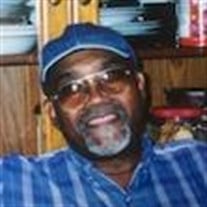 David Mitchell was born in Mer Rouge, Louisiana to the proud parents of Fermon Sr and Mary Mitchell on February 15, 1936. He went to be with the Lord on Tuesday April 7, 2020. David accepted Christ at a young age. He united with Greater Bible... View Obituary & Service Information

The family of David Mitchell created this Life Tributes page to make it easy to share your memories.

David Mitchell was born in Mer Rouge, Louisiana to the proud...

Send flowers to the Mitchell family.