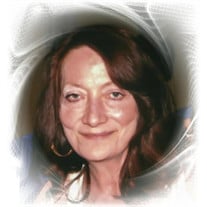 Bunny Ann Bancroft, age 64, passed away peacefully on Wednesday October 7, 2020. Born on March 5, 1956 in Denver, Colorado, Bunny had lived in several states in her youth. Ultimately settling in Bolingbrook and graduating from Romeoville High School in 1974, as a member of the National Honor Society. She was a long-time resident of Joliet until her passing. Bunny had been a dedicated and hardworking manager in several industries, and ultimately retired as a manager from Jewel Osco after a 17-year career. For much of her life, she found joy in cooking and caring for others; often putting the needs of others before her own. She was also known to have a quick wit and enjoyed a good laugh, which will be greatly missed. Bunny is preceded in death by her mother, Margaret Berry and sister, Holly Illg (nee Berry). She is survived by her devoted husband of 36 years, Michael Bancroft; loving daughters, Christina (Daniel) Chavez, Courtney (Diego Ceballos) Bancroft, and Colette (Robert Manolatos) Bancroft ; dear sister Madelyn Berry and numerous nieces, nephews, cousins, and friends. She held a special place in her heart for her grandchildren who were the light of her life; Jocelyn, Anthony, DJ, Lylah, Mya, Alyvia, and Joey. Per Bunny’s wishes, cremation rites have been accorded. A Memorial Service to honor her life will be held on Monday October 19th from 6pm-8pm at Delgado Funeral Chapel, 400 Landau Avenue, Jackson Street (Rte 6) with live webcasting for those who are unable to attend in person.

The family of Bunny Ann Bancroft created this Life Tributes page to make it easy to share your memories.

Send flowers to the Bancroft family.