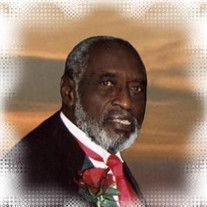 Billy Ray Merrick was born on September 21, 1935 in Altus, Oklahoma. He celebrated his new life on December 14, 2017. His early childhood education began in the Chicago Public School system. He graduated from Marshall High School in 1951. Billy married his childhood sweetheart, Grace Merrick, and to that union three children were born, JoAnna, Myron Turk and Lori. They divorced many years later but remained friends throughout the years. He held various jobs in the Chicagoland area with the CTA, the Chicago Police Department and at United Airlines. He was known by many names: he was affectionately called Ghamps or Jamps by his grandchildren; he was also known as: Uncle Billy, Uncle Bill, Billy, Bill, Big Bill and Mr. Merrick. He had a magnetic personality, never meeting anyone he didn’t like. He was well known and liked in many places, especially Maywood, Illinois. Billy loved old western movies. He was also an avid blues and jazz fan and a lover of all music. He also played the tenor saxophone at an early age. He was a man of many talents. Let him tell it, he could fix anything (and if he couldn’t, he knew somebody that could). He also loved fishing. Billy is preceded in death by both parents, Robert and Odessa Merrick, his son, Myron Turk Merrick and his long time lady friend, Dorcell Morrow. Billy leaves to cherish his memory, Grace Merrick, two daughters, JoAnna McQuitter and Lori Williams-Sheffey (Gaylord); daughter-in-law, Greta Merrick; brother, Robert David Merrick (CA); six grandchildren, Jenean McQuitter, Nicole Merrick-Gray (Marcus), Myron Turk Merrick Jr. (T2), Erika Galbreath, Brittani Dixon (Bobby) and Brianna Williams; Eleven great-grandchildren, Imani, Deja, Camren, Tyler, Kyan, Mia, Brooklynn, Lehlah, Addisyn, Peyton and Dena; other relatives and many, many friends including his two special friends, Alice and Sam.

Billy Ray Merrick was born on September 21, 1935 in Altus, Oklahoma. He celebrated his new life on December 14, 2017. His early childhood education began in the Chicago Public School system. He graduated from Marshall High School in 1951.... View Obituary & Service Information

The family of Billy Ray Merrick created this Life Tributes page to make it easy to share your memories.

Send flowers to the Merrick family.