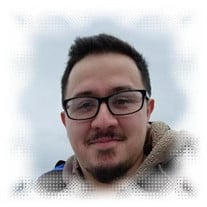 Aaron Michael Scofield – Age 31, passed away unexpectedly Thursday, January 18, 2018. He was born on August 28, 1986. Preceded in death by his grandparents; Ruby (nee Calcanas) and Julius Lopez; Marjorie (nee Webb) and Emil “Duke” Scofield, and his cousin Michael Naese. Survived by his wife, Roxanna (nee Jasso). Mother, Linda (James) Brodnicki; father, Geoffrey Scofield Sr. (companion Merrilyn Turner); brother, Geoffrey W Scofield, Jr.; sister, Sarah (Carlos) Jimenez; in-laws, Luz Elena and Arturo Jasso all of Joliet. Sister-in-laws Celena, Claudia, Cristina andElvira Jasso, and brother-in-law, Arturo Jasso. Nieces and nephew Mia, Xavier, and Elena Jimenez, Logan, Savannah, and Christian Scofield, Carlos and Diego Beltran, Anabelle Jasso, and Anthony Chao. Also numerous aunts, uncles and cousins. A lifelong Joliet resident. Living in Chicago the past six years. Aaron attended Holy Family Catholic School, Hufford Junior High, Joliet West High School and Joliet Junior College. Aaron worked as a warehouse technician for Amazon in Joliet. He enjoyed spending time with family, friends and his two dogs, Violet and Chico. As an avid gamer, enjoying, playing, collecting retro video games and listening to a wide variety of music. But above all, was his love for Roxy. Married four years and together 13 years. Still newlyweds at heart. When it came to his friends and acquaintances, Aaron proved to be a very compassionate and caring young man. Anyone who had the chance to know him, knew this to be so true. He would always be there if help was needed. Would rarely say no to anyone. He had a unique sense of humor, a love-filled laugh that will surely be missed. He would try and find the best in whatever the situation was. Aaron showed tremendous honesty in life. He enjoyed each day with whatever it would bring and lived his life to the fullest. Aaron had a love for animals and people, making friends easily with almost anyone he met. No words can express the extreme loss being felt by his family and all those who knew him.

The family of Aaron Michael Scofield created this Life Tributes page to make it easy to share your memories.

Send flowers to the Scofield family.